Visiting your local Chevy dealer will introduce you to best-selling SUVs like the Suburban. The full-size road warrior is renowned for its versatility and practicality, making it ideal for families and adventurers alike. Its large cabin guarantees ample space for people and gear, whether hauling groceries, luggage, camping equipment, or other items. However, despite its spaciousness, the Suburban isn’t the largest SUV ever made, as that honor goes to the Ford Excursion.

In production from 2000 to 2005, the Ford Excursion holds the title as the biggest SUV to ever hit the road in America. Inspired by the F-250 Super Duty truck, the Excursion was a behemoth on the road and earned its title as a Class 2 or heavy-duty SUV. But what made the Excursion so gargantuan, and how does it compare to the full-size SUVs that define the Chevrolet and Ford lineups for 2023?

The “Supersize Me” Mentality

The automotive industry is fueled by competition as automakers like Ford race against rivals to build better and more appealing models. This competition is apparent throughout history, especially in the 1970s when General Motors reintroduced the Suburban with a fourth door to make it larger than rivals like the Jeep Wagoneer. The trend continued when Ford introduced the next generation of the Bronco in the late 1970s, slating it against models like the Chevy Blazer and GMC Jimmy.

As drivers demanded more from their vehicles, automakers adopted the “bigger is always better” mentality, later dubbed the “Supersize Me” craze. By the 1990s, this approach took on a life of its own when Ford replaced the Bronco with the Explorer and Expedition. However, the American automotive pioneer didn’t stop there and worked tirelessly to build an SUV larger than the Suburban. It finally had its answer in 1999, with the debut of the Excursion.

Larger Than Life: The Ford Excursion

With the Expedition sharing a platform with the F-150, Ford knew it needed to up the ante and turned to the F-250 Super Duty for inspiration. The automaker built the Excursion on the truck’s platform, using the Super Cab design with the short bed that gave the SUV the same 137-inch wheelbase. However, the Excursion quickly exceeded its heavy-duty counterpart, courtesy of its distinct frame that made it taller and wider. The result was gargantuan, with the 2000 Excursion measuring 226.7 inches long, 80 inches wide, and 77.4 inches tall, making it difficult to park in most garages.

Ford ensured the heavy-duty SUV lived up to its name by outfitting the Excursion with a standard 5.4L V8 engine that delivered 255 horsepower. Drivers looking for more power didn’t have to settle for the V8 and could opt for the available 6.8L V10 engine that churned out 310 horsepower. Those looking to take advantage of the Excursion’s 10,000-pound towing maximum could easily do so with the 7.3L PowerStroke turbo diesel generating 525 lb-ft of torque.

Beyond its powerful heartbeat, the Excursion shared many other similarities with the F-250 Super Duty, specifically its exterior design. It looked more like the F-250 with a closed bed and less like an SUV. Fortunately, Ford differentiated the Excursion’s interior from its counterpart by making the SUV’s interior spacious and versatile. Offering seating for nine, the heavy-duty Excursion included a long list of standard and available features, like a CD player, cruise control, leather seating, and air conditioning. 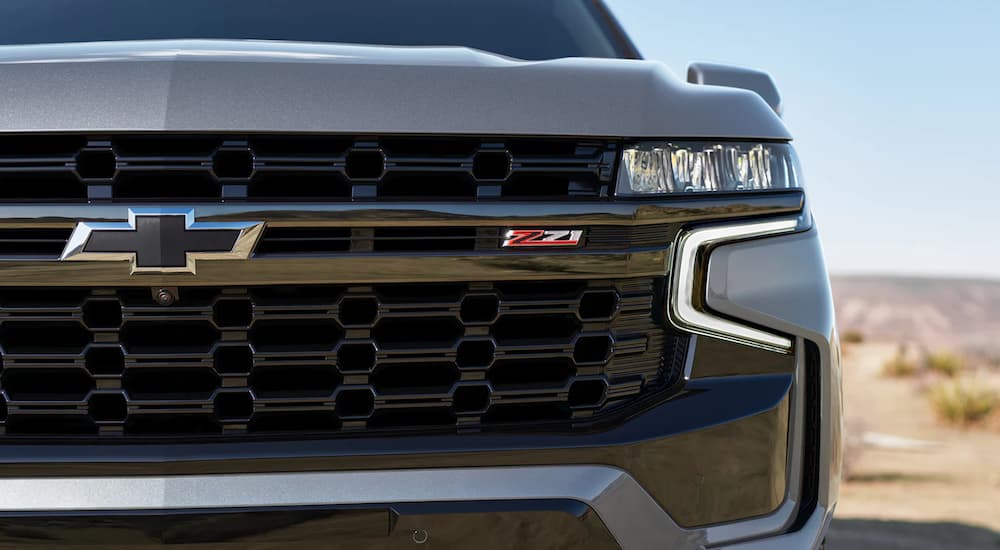 Measuring Against the Competition

The SUV craze in North America quickly shifted in the new millennium as drivers demanded more efficient alternatives and modern technology rather than sluggish behemoths and gas-guzzling land yachts. The shift led to the demise of the Excursion and makes the SUV a rare find on the road today. So, how can we genuinely understand its footprint compared to the SUVs found at dealerships around the country? By measuring the Excursion against the competition.

The Suburban continues its reign as Chevrolet’s best-selling SUV, especially in 2023 when the automaker adds to its appeal with advanced technology like Super Cruise. But how does it compare to the Excursion? Ford’s heavy-duty SUV sat on a 137-inch wheelbase, nearly three inches longer than the 2023 Suburban and its 134.1-inch wheelbase. Chevrolet’s Suburban is also more apt to fit in a garage, with a height of 75.7 inches. However, it measures over an inch wider at 81.1 inches compared to the Excursion at 80 inches.

While the Excursion was incredibly powerful, its power delivery is easily outshined by the 2023 Suburban‘s multi-engine lineup. The Suburban’s standard 5.3L V8 engine delivers 355 horsepower and 383 lb-ft of torque, a noticeable contrast to the Excursion’s 5.4L V8, which produced 255 horsepower. Chevrolet’s available 6.2L V8 is also impressive, delivering 420 horsepower compared to the 310 horsepower from Ford’s 6.8L V10.

The Excursion might be long gone from the Ford lineup, but its impact still lingers, as we see from models like the 2023 Expedition XLT MAX. A far cry from a heavy-duty SUV, the Expedition XLT MAX lives up to its name as an extended version of the best-selling Expedition. It offers seating for eight and a maximum towing capacity that falls 1,000 pounds short of the Excursion’s 10,000-pound maximum.

The Expedition XLT MAX has an expansive footprint that stretches the Expedition’s 122.5-inch wheelbase to 131.6 inches, still notably shorter than the Excursion (137 inches) and the Suburban (134.1 inches). Even so, the MAX’s stretched wheelbase accounts for its 221.9-inch length, making it almost five inches shorter than the Excursion (226.7 inches). The Expedition XLT Max’s height and width are more comparable with its gigantic predecessor and measure 79.9 inches and 76.2 inches, respectively.

Unlike the Excursion’s multi-engine lineup, Ford limits the Expedition XLT MAX to a single powertrain––a 3.5L EcoBoost V6 engine and ten-speed automatic transmission with SelectShift. The combination gives the Expedition ample power, producing 380 horsepower and 470 lb-ft of torque. It also rivals the Excursion’s standard powerplant, whose 255-horsepower output seems meek considering its footprint and the next-level capability of modern powerplants. The Evolution of Bigger and Better

The mentality that bigger is always better is prominent throughout our culture and permeates every aspect and venue, from fast food chains to automotive dealers across the country. This mentality characterizes the SUV craze in North America, specifically in the 1990s when automakers worked overtime to build larger and more spacious SUVs that doubled as workhorses, adventurers, and family haulers. This craze introduced us to behemoths like the Ford Excursion and set the stage for successors like the Ford Expedition XLT MAX. However, it also taught us a valuable lesson.

The Excursion may hold the title as the largest SUV ever made in America, but it also taught us that bigger isn’t always better. The gas-guzzling SUV posed a threat to our financial stability in the early 2000s, a period when Americans faced rising gas prices and economic turmoil. The Excursion’s size soon became too large and impractical, forcing it out of the public eye and giving staples like the Chevy Suburban and Tahoe room to shine.

Models like the Suburban and Tahoe continue to steal the spotlight as full-size SUVs that embody the adage that less is often more. While they may not share the same expansive footprint as the Excursion, their platforms are large enough to accommodate passengers and gear, and their powertrains are plenty capable. Moreover, they prove that SUVs aren’t sluggish performers and can be engaging to drive and easy to park in any garage, two standards the Excursion failed to meet.