We all know that truck drivers are resistant to change. After all, if you count on your pickup to make a living or trust your truck to get you home after a tough off-road adventure, you don’t want to take a risk on newfangled gadgets that might fail. That’s why modern trucks still rely on proven technologies like leaf springs, solid axles, and big V8 engines. It’s getting more and more difficult to find these features in cars and SUVs, but it’s hard to find a pickup that doesn’t have them. However, times are changing––particularly when it comes to those V8 engines.

If you visit your local Chevy dealer to take a look at a new Silverado or Colorado, you might be surprised just how many of these trucks no longer have a V8 or even a V6. Instead, you will find Chevy’s new 2.7L turbocharged I-4. A four-cylinder? In a full-size truck? No, Chevy isn’t crazy. In fact, this might be one of the best truck engines that Chevy has ever designed, and we expect to see it start showing up in even more of Chevy’s lineup as the years go by.

There Is a Replacement for Displacement

When it comes to truck engines, conventional wisdom says the bigger, the better. More cylinders and higher displacement mean more power. So why would Chevy leave behind the old 7.4L and 8.1L big block V8 engines of the past and switch to a tiny 2.7L I-4? Well, it turns out there is a replacement for displacement, and it’s called forced induction. Add a turbocharger or a supercharger to an engine, and it will punch far above what its size might suggest. In fact, the new 2.7L High-Output Turbo provides roughly the same output as the old 8.1L Vortec found in the first-generation Chevy Silverado!

How is this possible? Forced induction uses a compressor to push more air into an engine. More air means more fuel can be added, and the result is more power. In effect, it artificially increases the size of an engine. The two most common forms of forced induction are turbocharging and supercharging, but turbocharging is by far the most common because it is more efficient and allows for more power to be generated. Unlike a supercharger, which is always active, a turbocharger only kicks in when you need the extra power, allowing you to have the fuel economy of a smaller engine when cruising and the muscle of a larger engine when the job requires it. Turbocharging Is a Proven Technology

Now, turbocharging isn’t exactly a new technology, and Chevy has built quite a few turbocharged engines in its time. In fact, the very first production car with a turbocharger was the 1962 Chevy Corvair. Originally, the higher expense and maintenance requirements of turbocharged engines meant they were restricted to high-performance models, but as the technology became more reliable, turbochargers started appearing on more and more vehicles. The extra power and efficiency were simply too good to ignore, and today, the only non-electric models in Chevy’s lineup that don’t offer some form of forced induction are the Traverse and Corvette.

Trucks were one of the last segments to offer turbocharged gasoline engines, but Ford broke the ice in 2011 when it introduced the 3.5L EcoBoost V6 for the F-150. Many old hands predicted the worst, arguing that the small-displacement turbocharged engine would inevitably fail when used for hard work, but the EcoBoost soon proved itself. In 2015, Ford added a smaller 2.7L EcoBoost to the F-150 lineup, and the two turbocharged engines now make up the majority of F-150 sales. Seeing Ford’s success with turbocharged truck engines, Chevy knew it was time to get in on the game and introduced its own 2.7L Turbo for the Silverado in 2019.

However, it shouldn’t be a surprise the turbocharged gasoline engines were so successful––after all, trucks have been using turbocharged diesel engines forever. In fact, GM designed its first turbo-diesel truck engines in 1938! For a long time, these were restricted to tractor-trailers and other large commercial trucks, but in 1992, the Chevy C/K pickup received its first turbo-diesel option. Since then, turbo-diesels have featured prominently in Chevy heavy-duty trucks and made their way to the light-duty Silverado 1500 in 2020. The modern Duramax turbo-diesel is prized for its performance and longevity, so why would Chevy’s 2.7L turbocharged gasoline engine be any different?

The Powerful and Flexible 2.7L Turbo

When it was first introduced in the 2019 Silverado, Chevy’s 2.7L Turbo produced 310 hp and 348 lb-ft of torque. These are competent, if not particularly impressive, numbers putting the engine squarely between the base 4.3L V6 and the optional 5.3L V8 engines. However, when the Silverado was redesigned for 2022, Chevy overhauled the 2.7L engine to be more rugged and produce significantly more power. Now producing an impressive 430 lb-ft of torque––nearly 50 lb-ft more than the 5.3L V8, the new 2.7L High-Output is a solid pick for any pickup driver.

Not only does it offer comparable power to Chevy’s 5.3L V8, but the 2.7L High-Output provides solid towing and payload ratings. Able to tow up to 9,500 lbs, there are very few tasks appropriate for a light-duty truck that a 2.7L Silverado can’t accomplish. On top of this reliable level of performance, the 2.7L engine is remarkably efficient. Because the turbocharger only kicks in when needed, this engine allows the 2022 Silverado to achieve up to 20 MPG combined––a significant upgrade over the 18 MPG combined of the 5.3L V8.

One of the less-obvious advantages of a turbocharged engine is that it can be tuned to produce different levels of power simply by changing the amount of boost the compressor is generating. This means that Chevy can offer several versions of the 2.7L Turbo that are mechanically identical but have different performance figures. This is on full display with the redesigned 2023 Chevy Colorado. Rather than offering several different engines, the new Colorado has three different versions of the same 2.7L engine.

The base engine for the 2023 Colorado is the 2.7L Turbo, generating 237 hp and 259 lb-ft of torque. This detuned version offers improved reliability and efficiency while still handily beating the Colorado’s old 2.5L non-turbocharged engine. If more power is desired, simply opt for the 2.7L Turbo Plus or the 2.7L High-Output Turbo. The Turbo Plus brings 310 hp and 390 lb-ft of torque to the table, which is over 100 lb-ft more than the last-generation Colorado’s V6 engine and 20 lb-ft more than the 2.8L “baby Duramax” turbo-diesel. Finally, the 2.7L High-Output Turbo is the engine from the Silverado, giving the midsize Colorado the power of a full-size truck. 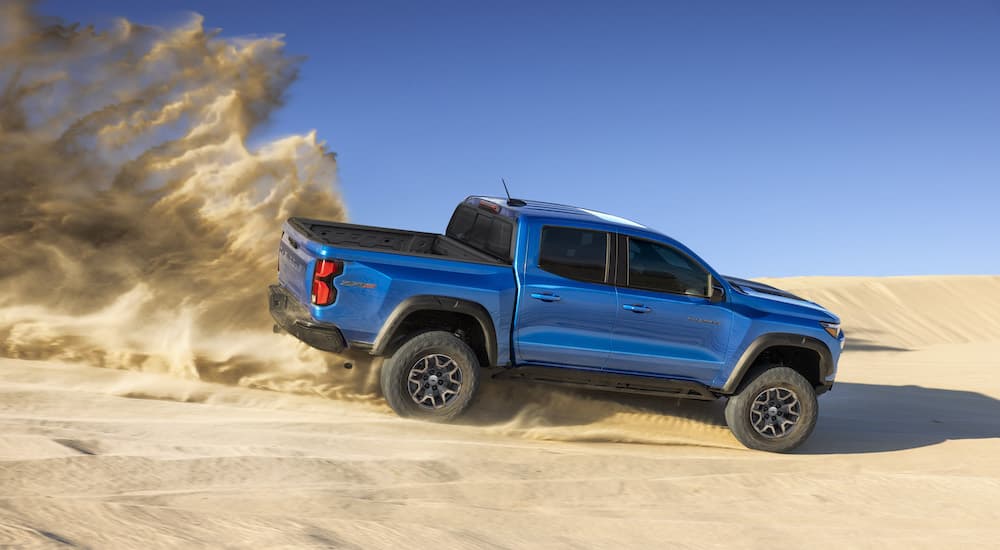 Will the V8 Vanish?

As engine technology continues to improve, we will have to continue to reconsider what makes a good truck engine. Old rules of thumb that claimed the more cylinders, the better no longer hold true when confronted with options like Chevy’s new 2.7L High-Output Turbo––and that’s even before considering the only slightly larger 3.0L Duramax turbo-diesel that is available in the Silverado. While Chevy has yet to offer a turbocharged gasoline engine that can replace its 6.2L V8 and compete with Ford’s 3.5L EcoBoost, the 2.7L High-Output Turbo deserves serious consideration over the more traditional 5.3L V8. With more torque and substantially better fuel economy, this small turbocharged engine is a good fit for the Silverado 1500 and won’t let you down at the job site or on the trail.