It’s not easy to be the stalwart workhorse of an automotive brand. The spotlight shines more brightly on exciting new launches and displays of innovation. But in the era of electrification, one vehicle – the 2022 Chevy Traverse – stubbornly bucks the trend and doubles down on delivering torque and performance the old-fashioned way.

There is no electrified Traverse on the horizon, but Chevy is committed to its full-size 8-passenger SUV regardless. Year-over-year sales are steady, a fact that bolsters Chevy’s confidence in maintaining the status quo. The Traverse is easy to miss since it’s not the cheapest SUV in its class, nor is it the most luxurious. Rather, the Traverse is a comforting “just right” option.

Why should you consider it, then? For the very same reason that Chevy continues to invest in updates and model year refreshes: the Traverse is predictable, reliable, and offers tons of value for the price. We’re not sure when practicality became so unpopular, but in an era of political and economic uncertainty, opting for a practical vehicle seems downright trendy. 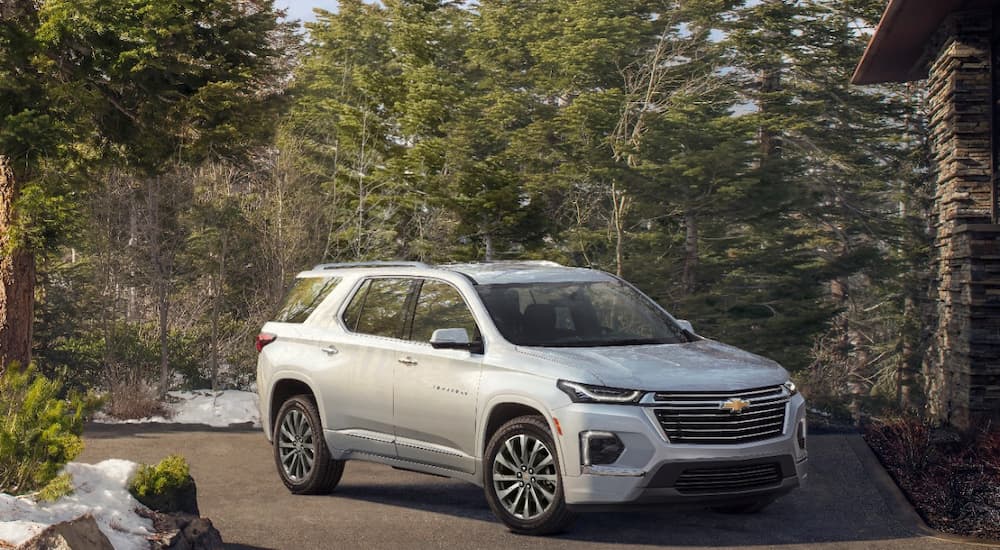 The Traverse Does Double Duty

As demand for minivans evaporated, Chevy refined its SUV lineup to capture displaced buyers. In that vein, the Traverse took on the challenge of appealing to value-conscious families without putting off more mainstream SUV seekers. With its roomy cabin, ample cargo space, and expansive trim lineup, the Traverse more or less succeeded but did so without fanfare.

For 2022, the Traverse gets a standard 310-horsepower V6 engine, along with plenty of in-cabin infotainment technology to keep up with the competition. The vehicle’s exterior also received a substantial exterior facelift that includes an avant-garde array of LED lighting that complements its more angular architecture.

In its most expensive High Country trim, the Traverse reaches into the $50,000 price range, but price shoppers can easily find a trim that costs well under $40,000, even in an all-wheel drive configuration. Typically, vehicles that offer such a broad range of pricing and trim configurations suffer from identity issues. Is the car for buyers on a budget, or is it a premium offering? Chevy manages to straddle both subcategories without alienating buyers on either end of the spectrum, a feat largely accomplished by the nameplate’s steady presence.

There’s something to be said for broad appeal. The Traverse works for a lot of different lifestyles, from carpooling families to daily commuters who prefer the safety of a larger vehicle. What many people don’t realize is that it’s far more difficult to design a car with universal appeal than it is to craft a low-volume specialty model. It’s a skill at which Chevy excels, and the consumer is the beneficiary.

The Benefits of Mass Production

With marketing terms like “specialty” and “exclusive” permeating automakers’ ad campaigns, it’s easy to assume that only a select few vehicles qualify for cool status. The Traverse’s no-nonsense approach counters that argument. Cool doesn’t have to come at the expense of value, but Chevy is content to let buyers discover this on their own.

The company has a long history of building cars for broad swaths of buyers. That these vehicles are mass-produced doesn’t detract from their quality. In fact, one could argue that the more Traverses Chevy makes, the better they get at making incremental quality gains. Mass-produced vehicles shouldn’t be saddled with labels like cheap or low quality.

Mass production allows automakers to spread costs across larger volumes of vehicles, which results in lower prices at the customer level. By contrast, low-volume full-size SUVs tend to fall into premium price brackets even for their bare-bones trims. A quick look at the Traverse’s spec sheet reveals that it shares several of the same comfort and convenience features as its full-size sibling for a much lower price.

The Traverse competes in the ruthless midsize SUV segment, with entrants from nearly every large manufacturer battling for market share. Names like the Ford Explorer and the Toyota Highlander usually end up on buyers’ consideration lists. In the face of such stiff competition, the Traverse wins buyers for its roomy cabin, generous horsepower, and surprisingly high fuel economy ratings.

What Lies Ahead for the Traverse?

As far as vehicle life cycles go, the Traverse is fairly early in its evolution. It’s currently in the middle of its second-generation after a redesign in 2018. First launched as a 2010 model, the Traverse has remained true to its roots as a family-friendly 8-passenger SUV and has enjoyed an average annual sales volume of over 100,000 units.

The second-generation ushered in more truck-like exterior styling, aligning the Traverse nicely with its big siblings, the Tahoe and the Suburban. In fact, many buyers who don’t relish the idea of piloting a land yacht end up buying a Traverse. It still offers three rows of seats without the extra bulk, as well as plenty of the upscale luxury features found on the larger models.

Without a doubt, Chevy is well-positioned to take advantage of America’s ongoing SUV obsession. The Traverse is but one of seven Chevy SUV models that span every imaginable size category and price point. From the tiny Trax to the mighty Suburban, America’s largest auto manufacturer builds a vehicle for just about everyone.

Moving forward, we can expect General Motors’ aggressive electrification plan to continue trickling down to Chevy’s lineup. While there are no imminent plans for an electric Traverse, the all-new Bolt EUV and upcoming electrified Silverado leave no room for speculation about the role Chevy vehicles are playing in GM’s strategy.

GM expects to have 30 EVs distributed across the lineup by 2025, but it’s not clear which Chevy nameplates are in the running. Given the popularity of the SUV body style, it’s safe to say that most of GM’s $27 billion investment is centered on designing utility vehicles like the Traverse. We’ll have to stay tuned, but the Traverse is slated to remain gasoline-only for now. Why You Should Test Drive a Traverse

In the meantime, Chevy’s 2022 Traverse optimizes combustion engine performance without sacrificing fuel economy, a dynamic that full-size SUV buyers will come to appreciate during the ownership experience. It’s also a capable towing vehicle, offering up to 5,000 pounds of towing brawn which is plenty for hauling a boat or a camper.

The Traverse sits at the large end of the competitive set, offering more room than the Explorer and the Pilot, especially when comparing cargo capacity. You’ll get 23 cubic feet of space with all the seats in place. Behind the second row, that number increases to 57.8 cubic feet, and with all the seats folded flat, the Traverse can accommodate 98.2 cubic feet of gear. Since most folks choose a large SUV for utility, those dimensions should move the Traverse higher up on the list.

If luxury is the goal, the Traverse High Country delivers. Everything from perforated leather seats to a 10-speaker Bose premium audio system comes standard, as does connected navigation via the HD infotainment touchscreen. A robust suite of driver-assist systems that includes adaptive cruise control and an HD surround 360-degree camera is also standard on the High Country.

There’s no shortage of options in the SUV category, even if your list of requirements includes seating for 7 or 8 passengers. For some manufacturers, capturing market share requires flashy advertising and frequent product tweaks, but slow and steady describes Chevy’s Traverse strategy. The company is banking big on practicality making a comeback, and when it does, the Traverse will be waiting.