Ford began in 1903 as a true innovator building a whole industry from scratch. They broke out into the world in a time where driving a car was an unfamiliar concept, and the horse and buggy reigned supreme. Since then, Ford has continued to push the envelope providing vehicles that satisfy a wide range of drivers. The performance loving speed car driver to the workman sitting behind the wheel of a Ford F-150. One of the many areas that Ford has continued to innovate is in the production of the SUV. These vehicles began as large hulking pieces of machinery designed for sport and utility, perfect for road trips and hauling cargo. Today they have become sleek and efficient, an ideal choice for large families, and the everyday adventurer. With all the existing Ford SUVs for sale today, it is worthwhile to return to the roots of the Ford SUV and find out where these incredible vehicles began.

The Introduction of the Ford Bronco

The SUV existed well before 1966. It was a type of car spearheaded by Ford rivals at Chevy and were showcased as luxury-grade vehicles that dated back to the start of the auto industry. That said, what Ford did was provide access to the SUV market, designing a vehicle that could satisfy the everyday man. In 1966, they unveiled the Ford Bronco.

The 1966 Ford Bronco was a compact two-door boxy SUV that harkened back to the Jeep army buggies of the past. While great for day use, the Ford Bronco was explicitly designed for off-pavement driving. The initial idea for the Ford Bronco was for it to compete with the Jeep CJ-5, a similarly rugged vehicle that offered worthwhile off-road driving as well. While the Ford Bronco started small, it didn’t stay that way. The first generation eventually went on to offer a three-door wagon option, as well as a no door roadster. With a 3-speed manual and automatic transmission, driving the Ford Bronco was all bare bones. Although for many modern-day appreciators of the classics, this is hardly an issue. The standard engine beneath the hood of the first-generation Ford Bronco was a 170 cubic inch 2.8-liter straight-6 engine which offered up 105 horsepower to the table. Which may not seem like a lot at first glance, but was quite impressive at the time. If you decided to upgrade your Bronco, you certainly wouldn’t be disappointed as the first-generation Ford Bronco also offered a 200 horsepower 289 cubic-inch V8 as an option. While in 1969, that was enlarged to 302 cubic-inch V8 engine.

From the second generation on, the Bronco continued to shift more and more to match the more modern Ford SUV design that we’re familiar with. By the time the Ford Bronco reached its discontinuation in 1996, it had looked quite different from its predecessors during that time. The fifth and final generation of the Ford Bronco took a step away from off-road driving. The SUV still delivered a considerable amount of power with its standard 4.9-liter Straight-6 engine; it heralded a new age for Ford SUVs.

The Ford Explorer – A New Age of SUV

The Ford Explorer hit dealerships across the country in 1991, promising a more passenger-friendly version of the Ford Bronco. Meant to compete against the Chevrolet S-10 Blazer and the Jeep Cherokee, it was a mid-sized SUV that sported both a 3-door and 5-door body style. The first generation of the Ford Explorer only offered a single engine option, a 4.0-liter OHV Cologne V6 which allowed for a combined fuel economy of 18 mpg. The Ford Explorer was their step into the SUV market that made passenger comfort and transporting a top priority.

Since the first generation, the Ford Explorer has continued to be a promising member of the family lineup. While the vehicle has changed a lot since its 1991 introduction, the Explorer continues to be a prime choice for families and drivers who expect a little more utility out of their vehicles. The 1991 release of the Ford Explorer introduced Ford into the full-sized SUV field, however, with the phasing out of the Ford Bronco in 1996, Ford needed another compact SUV to compete. This desire for something smaller led Ford to the release of the Ford Escape. 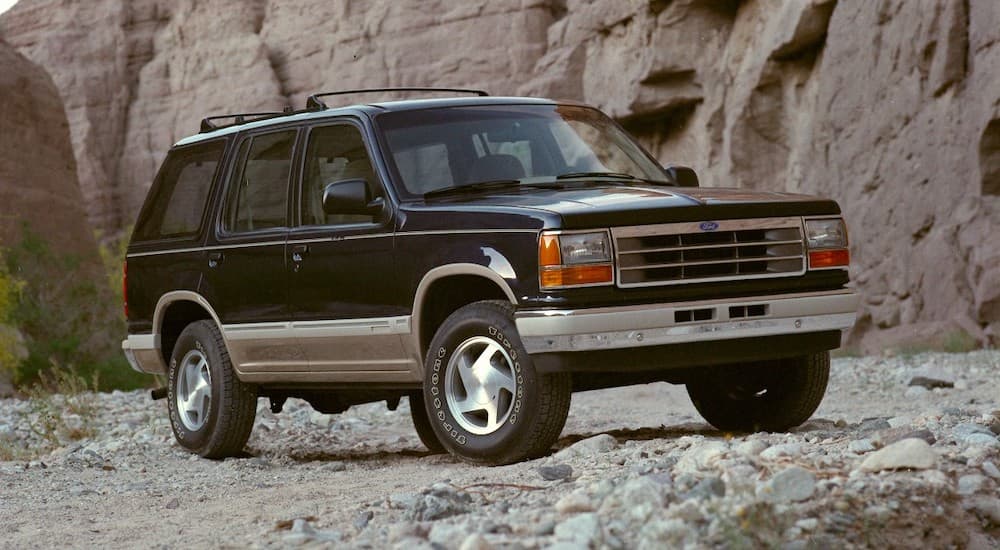 The Ford Escape – Groundwork for a New Generation

The Ford Escape entered the field in 2001, putting Ford back on the map as a compact SUV producer. The first generation of the Ford Escape may have been small, but it was mighty, standing in direct contrast of its larger counterpart the Ford Explorer. Equipped with a punchy 2.0-liter 4-cylinder engine, the Ford Escape laid the foundation for a generation of compact Ford SUVs. The Escape would blend the utility of the SUV with the ease, comfort, and fuel economy of something like a small car. Speaking of fuel economy, the first Ford Escape earned an EPA-rated 23 mpg in the city and 28 mpg on the highway putting the Ford Explorer to shame. While it only sat 5, the Ford Escape excelled in providing drivers with plenty of utility with the option of adding an AWD drivetrain to the mix.

Since the 2001 release of the Ford Escape, has continued to be the flagship compact SUV of the Ford family lineup. In fact, the Ford Escape continues to push the envelope, with the 2020 model to add a hybrid model into the mix expanding on fuel economy and making for a cutting edge driving experience.

From Then to Now

Since the initial introduction of the Ford Bronco in 1966, the Ford SUV has changed quite a lot. What began as a venture into the space of off-road utility cars, has culminated Ford to be a leading producer of next-level compact and full-sized SUVs. Ford has always aimed to build vehicles that cater to drivers from all walks of life. There was a time when the Ford SUV was exclusive to those who wanted a vehicle that could handle the rough and tumble of the trail. Today, the Ford SUV is a universal vehicle, designed for all drive styles and lifestyles. Whether you’re looking to take your Ford SUV out into the remote wilderness or want to use your car as a day-to-day commuter. Ford has designed a plethora of SUVs that are bound to meet and even exceed every automotive need. That said, appreciation for the classics continue to this day. The first and second generation of the Ford Bronco continues to be beloved classics, and they grace car shows and showrooms around the world. While Ford continues to move forward, it is clear that the roots of the Ford SUV continue to strike a chord within utility drivers everywhere.