When was the last time you considered buying a sedan? Like most Americans, you’re probably currently driving a crossover. The question is, are you driving a crossover for the right reasons? The SUV revolution snuck up on us, uprooting decades of sedan dominance and forever altering the automotive palates of families and commuters. Most of us believe the sedan is well on its way to obscurity; however, it appears Chevy didn’t get the memo.

The 2023 Chevy Malibu defiantly appeared on dealer lots this fall, challenging buyers to rethink whether crossover ownership is truly what they need. Looking awfully fresh––especially wearing a coat of Radiant Red exterior paint––the Malibu soldiers on, offering an SUV alternative that eschews overdone boxy Sponge-Bob-Square-Pants crossover architecture for low-slung sculpted angles and sleek contours. Let’s face it: not everyone wants a crossover.

That the Malibu endures amidst futuristic EVs and an unending assortment of crossovers is a small automotive miracle. It’s also evidence of an industry in transition. Independent Chevy watchdog GM Authority reported a 148.17% increase in year-to-date Malibu sales, with a reported 79,799 sold in 2022, up from just over 32,000 units at the same time last year. Is the Malibu bound for extinction like so many of its bowtie brand predecessors, or will Chevy double down on its sole remaining sedan? Looking forward first requires looking back.

The word “sedan” didn’t always apply to a four-door body style. Technically, sedans are sedans if they have a fixed roof, closed-in body, and separate passengers from cargo and engine spaces. Newer definitions require a handful of extra characteristics, including a B-pillar between the front and rear side windows and two rows of seating.

The first-ever sedan came from Studebaker back in 1912, but some historians argue that Renault beat them to it with the Voiturette Type B. The Type B featured the industry’s first enclosed roof but only had two doors. By 1950, U.S. automakers had introduced the term “hardtop sedan” into the automotive nomenclature. Automakers eventually differentiated sedans from coupes by outfitting the former with four doors and the latter with two, but newer EV models sometimes use the two terms interchangeably.

To the buying public, sedans are cars, much like pickups are trucks. Crossovers straddle the fence, offering the capability of a truck with the ride handling and fuel economy of a car. Differentiating between coupes and sedans often boils down to performance. Corvettes are “performance coupes,” which hints at a level of sportiness not found in other passenger cars. Though plenty of performance sedans exist, time and clever marketing have unfairly cursed the sedan body style with a stodgy, pokey image. 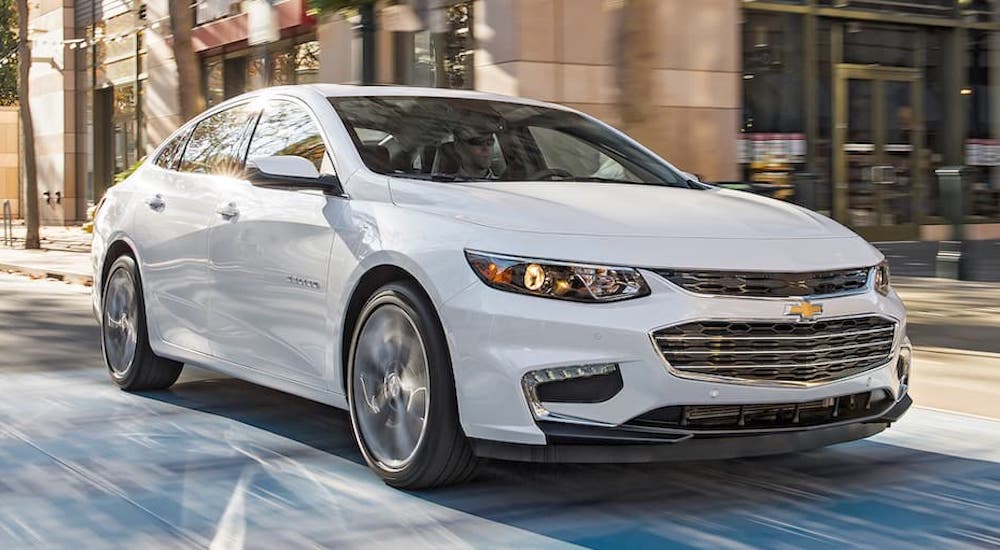 Though iconic Chevy sedans like the Malibu and the legendary Impala evolved over decades of production, early versions focused on performance more than practicality. The Malibu began its life as a Chevelle trim, cementing the nameplate as a cool-by-association muscle car. The 1968 Chevrolet Chevelle Malibu SS paired big block 396 performance with an aggressive two-door body style, but it wasn’t until 1974 that Chevy downgraded the Malibu to an entry-level trim.

In 1978, Chevy discontinued the Chevelle name, officially replacing it with the Malibu. Designed for efficiency and hinting at its eventual future as a practical family sedan, the 1978 Malibu was lighter, shorter, and simpler, with more trunk space and a smaller V6 engine. Buyers could choose from a coupe, sedan, or station wagon. Interestingly, early Malibu sedans came with fixed rear windows, which created ventilation problems and increased sales of factory air conditioning.

As the twentieth century ended, Chevy doubled down on the Malibu’s practical positioning, offering a redesigned 1997 version equipped with front-wheel drive that earned it MotorTrend Magazine’s coveted Car of the Year award. Early 2000-era Malibus shrank even more, keeping horsepower ratings in commuter-friendly ranges and favoring cost-conscious configurations until the Malibu SS reappeared. With a 240-horsepower V6 and a sport suspension, the 2006 and 2007 Malibu SS gave buyers a taste of old-school Malibu performance.

One look at the modern Malibu’s contours reveals Chevy’s struggle to solve its image problem. Plagued with the baggage of a body style that lacks the mainstream cool factor, the Malibu struggles to find a niche with would-be buyers. Still, Chevy boldly launched the 2023 version and realized record sales. Do the numbers foretell a sedan renaissance? The Malibu shoulders that burden as one of the few remaining midsize sedans on the market.

The 2023 Malibu ticks the fuel economy box with 27 MPG in the city and 35 MPG on the highway, remains imminently affordable at a starting price of under $25,000, and offers a respite from the boxy crossover. Futuristic technology like wireless smartphone connectivity and radar-assisted safety systems infuse the Malibu with a modern vibe, as does the sedan’s clever styling. Still, attracting mainstream buyers will take a herculean marketing effort.

Chevy’s simplified lineup distinguishes each level with trim-specific equipment, slotting the base LS as an affordable entry option and flavoring trims like the RS with unique exterior embellishments. At the high end, the 2LT adds navigation, LED headlights, and big 19-inch wheels, along with plenty of convenience and comfort features premium buyers want. Robust connected services are also on offer for tech-oriented buyers.

The Malibu’s standard 160-horsepower turbocharged engine delivers sufficient power and acceleration capability to tackle highway acceleration and pack in a few on-the-road thrills, but performance is tempered by Chevy’s commitment to practicality. Chevy designed the Malibu for comfort and affordability. A roomy cabin provides plenty of room for five passengers, and the ergonomic dash is pleasantly driver-centric. Will There Be a Tomorrow?

Once upon a time, sedans ruled the road. Today, they’re almost an anomaly. What does the future hold for this classic body style? Automakers like Chevy remain closed-lipped about their long-term plans. For now, the 2023 Malibu proudly stands alone as Chevrolet’s sole remaining passenger car. Rivals Honda and Toyota continue producing sedans in the compact and midsize segments, but for how long, no one knows for sure.

Luckily, sedans like the 2023 Chevy Malibu aren’t simply carryovers from previous model years; they’re upgraded every year with newer, modern technology and design tweaks. In other words, they’re equipped with the same features found on comparably priced crossovers. Buyers who aren’t keen on crossover bulk can still have all the bells and whistles without caving to the SUV trend. It’s hard to imagine a future where our children’s children don’t know what a sedan looks like, but we could be headed in that direction sooner than we think.

Sedans will always offer better aerodynamics than crossovers. You won’t feel the thrill of every turn quite as viscerally as you will behind the wheel of a low-slung four-door. It’s just not the same from your crossover’s high perch. It’s these differentiators that trigger our emotions––the same emotions that despair at the thought of a world without sedans. Americans love driving. We love our cars, and we love the hint of adventure inherent in a stretch of open road. Is that feeling as strong when you’re piloting a land yacht?