The SUV body styling is popular, incredibly popular. Sure, there is still plenty of praise for pickup trucks, sedans, and coupes, but the sports utility vehicle is the king of the hill right now. There once was a time when SUVs were big hulking behemoths that guzzled gas for the sacrifice of spacious interiors and robust towing capacity. Nowadays, though, SUVs have been tailored to be more fuel-efficient, all while still providing the same level of beefy powertrains that once graced more classic models. And amongst the growing field of SUVs, the Ford Expedition and the Ford Explorer are clear standouts. So, let’s get to know these two popular SUVs of theirs in a comparison: 2020 Ford Expedition vs 2020 Ford Explorer.

While many SUV models are downsizing, the 2020 Ford Expedition and the 2020 Ford Explorer are both heavyweight SUVs that deliver remarkably sized cabins and robust powertrains. The 2020 Ford Explorer is the smaller of the two models, though, offering a large SUV driving experience for as little as $32,765 MSRP. Trim options in the Ford Explorer are varied enough, offering drivers the choice between the base Explorer, the XLT, the Limited, the ST, and the Platinum. The price is sure to go up with higher trims, but some drivers may think it worth it considering the additional bells and whistles that are included.

The 2020 Ford Expedition, on the other hand, has a much steeper entry price. Visit a dealership to purchase a model, and you’ll find even baseline versions cost upwards of $52,810. That said, when you buy a Ford Expedition, you’re getting a lot more room than you would in the Ford Explorer. The Ford Expedition comes in several different trims, almost all of which have their bigger and beefier “MAX” alternative. These trims include the XLT, the Limited, the King Ranch, and the Platinum. 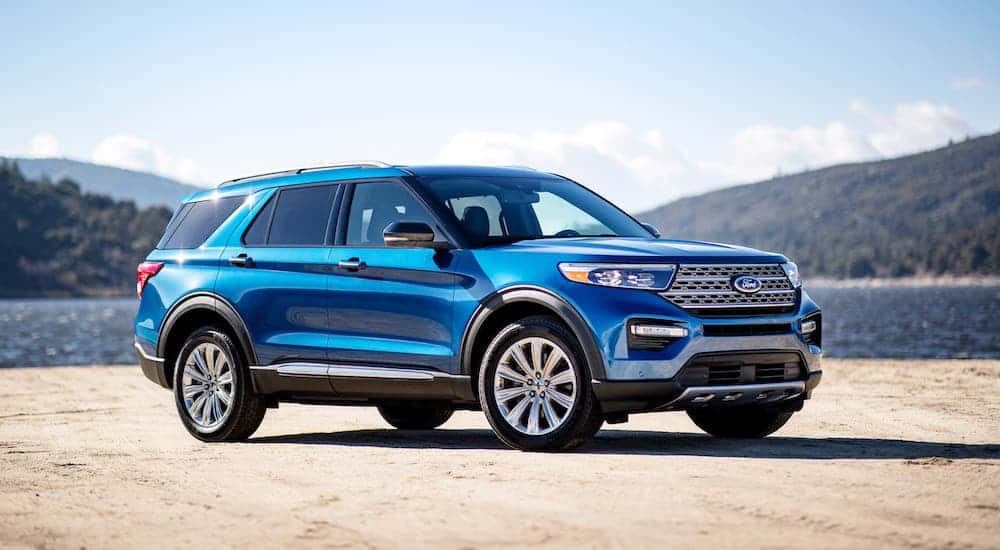 A Close Look at Performance

These are both pretty sizable SUVs, and due to that fact, one should expect some pretty considerable engines beneath their hoods. The smaller Ford Explorer comes as standard with a 2.3-liter EcoBoost engine that is optimized to provide 300 hp and 310 lb-ft of torque. This base engine is not half bad all things considered, especially when you take a gander at the base model’s fuel economy, which is an impressive 24 MPG combined. A 10-speed automatic transmission supports this base engine, and a rear-wheel drivetrain is considered standard fare.

If the baseline fuel economy isn’t good enough, you can easily upgrade to the hybrid variant, which uses a 3.3-liter V6 and is responsible for 318 hp and 322 lb-ft of torque. This engine’s fuel economy is excellent at 28 MPG combined. But in terms of additional non-hybrid powertrains, the Ford Explorer also gets a 3.0-liter turbocharged V6, which has an output of 365 hp and 380 lb-ft of torque. These numbers increase a bit with the Platinum trim; this trim gets 400 hp and 415 lb-ft of torque. That said, no matter which model you choose, you’ll get to enjoy a plethora of drive modes, which include: Normal, Sport, Trail, Slippery, Tow/Haul, and Eco. And if you upgrade to the four-wheel drivetrain, you’ll get Snow, and Sand added to the available drive modes as well.

By comparison, the 2020 Ford Expedition is an absolute powerhouse, which makes sense, considering the size disparity here. Base models of the Ford Expedition get a twin-turbocharged 3.5-liter V6 with a 10-speed automatic transmission that produces 375 hp and 470 lb-ft of torque. Unfortunately, other configurations don’t stray too far from this initial powertrain build. You can upgrade the output of the Ford Expedition in the Platinum trim, though, which has an output of 400 hp and 480 lb-ft worth of torque.

As to be expected, a four-wheel drivetrain is available, and there is even an FX4 off-road package. This off-road system adds additional drive modes, as well as additional off-road gear. Hauling power in the Ford Expedition is a particular highlight, as max capacity tops out at around 9,300 pounds, which is hard to come by even in large SUVs. Unfortunately, there isn’t a hybrid model to be found in the family lineup; however, the fuel-conscious models earn 20 MPG combined, which is pretty good for such a large vehicle.

So which of these SUVs wins in the powertrain debate? Well, the Ford Explorer certainly offers more variety, but the power of the Ford Expedition ought not to be understated. In the end, it comes down to preferences and what kind of power or savings you need. A Peek at the Interior

Now that we have performance covered, let’s take a peek inside the vehicles. While one of these SUVs is larger than the other, they both provide an aptly designed interior. For instance, the Ford Explorer gets a max cargo capacity of 87.8 cu.ft. of cargo room behind the front row of seats, as well as cloth upholstery in base models. More premium materials are available, as is a 50/50-split third-row seat. Meanwhile, the Ford Expedition delivers a tremendous 104.6 cu.ft. of cargo space in non-MAX models, and 121.5 cu.ft. in MAX models. Like the Ford Explorer, the interior of the Ford Expedition can be dressed in either cloth or leather, depending on how much you decide to spend.

Although, it is important to note that the interior space and materials are only half of the puzzle. Interior amenities, such as infotainment screens and comfort features, can go a long way in transforming your ride. The Ford Explorer starts rather strong with a sizable 8-inch infotainment touch-activated display that is compatible with Apple CarPlay and Android Auto thanks to Ford’s Sync 3. Higher-end models add more premium bells and whistles, including a 110-volt AC outlet, a wireless smartphone charging station, and a surround-view camera system.

The Ford Expedition also comes with an array of onboard tech that is bound to elevate your drive. Base models get an 8-inch infotainment touchscreen with Apple CarPlay and Android Auto compatibility, as well as six-speakers and a plethora of USB ports. Higher-end models grow on this offering, moving into the near-luxury territory. Features like keyless ignition, 10-way power-adjustable front seats, a rear-seat entertainment system, and a panoramic sunroof can all be found in high-end trims of the Ford Expedition. Really, the offerings are quite similar between the two SUVs in terms of interior features.

Which is the Better SUV?